Skip to content
Home > Events > Professor Christopher Rea (Department of Asian Studies, University of British Columbia, Vancouver): On the Make: Chasing the Con Artist, from the Mississippi River to China's Rivers and Lakes 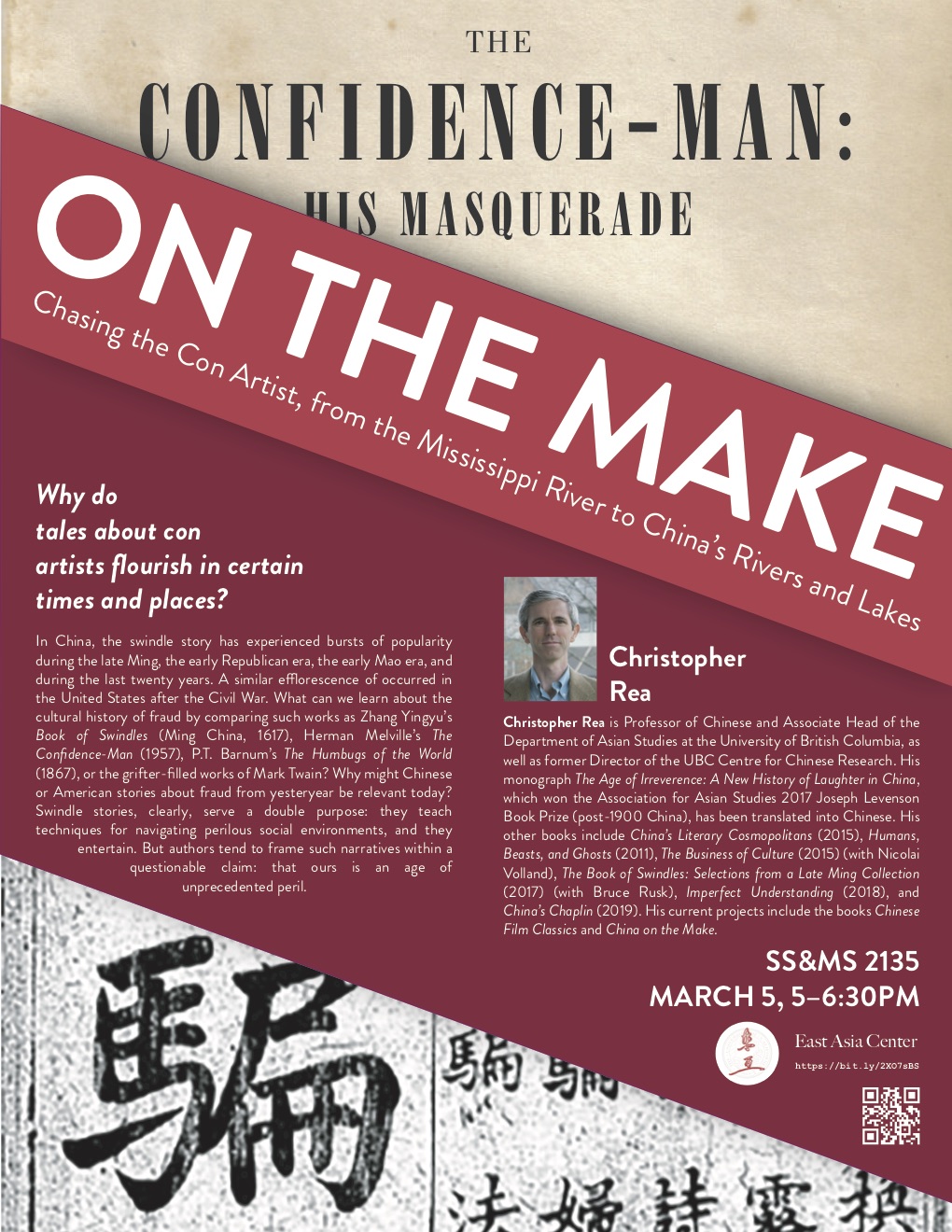 Professor Christopher Rea (Department of Asian Studies, University of British Columbia, Vancouver): On the Make: Chasing the Con Artist, from the Mississippi River to China’s Rivers and Lakes 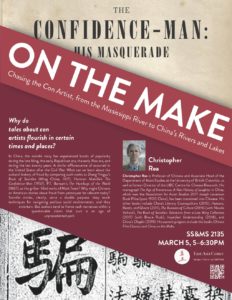 Why do tales about con artists flourish in certain times and places?

In China, the swindle story has experienced bursts of popularity during the late Ming, the early Republican era, the early Mao era, and during the last twenty years. A similar efflorescence of occurred in the United States after the Civil War. What can we learn about the cultural history of fraud by comparing such works as Zhang Yingyu’s Book of Swindles (Ming China, 1617), Herman Melville’s The Confidence-Man (1957), P.T. Barnum’s The Humbugs of the World (1867), or the grifter-filled works of Mark Twain? Why might Chinese or American stories about fraud from yesteryear be relevant today? Swindle stories, clearly, serve a double purpose: they teach techniques for navigating perilous social environments, and they entertain. But authors tend to frame such narratives within a questionable claim: that ours is an age of unprecedented peril. Focusing on China and the United States, this talk will highlight one historical thread leading up to our present moment: admiration for the swindler’s ingenuity.

Christopher Rea is Professor of Chinese and Associate Head of the Department of Asian Studies at the University of British Columbia, as well as former Director of the UBC Centre for Chinese Research. His monograph The Age of Irreverence: A New History of Laughter in China, which won the Association for Asian Studies 2017 Joseph Levenson Book Prize (post-1900 China), has been translated into Chinese. His other books include China’s Literary Cosmopolitans (2015), Humans, Beasts, and Ghosts (2011), The Business of Culture (2015) (with Nicolai Volland), The Book of Swindles: Selections from a Late Ming Collection (2017) (with Bruce Rusk), Imperfect Understanding (2018), and China’s Chaplin (2019). His current projects include the books Chinese Film Classics and China on the Make.